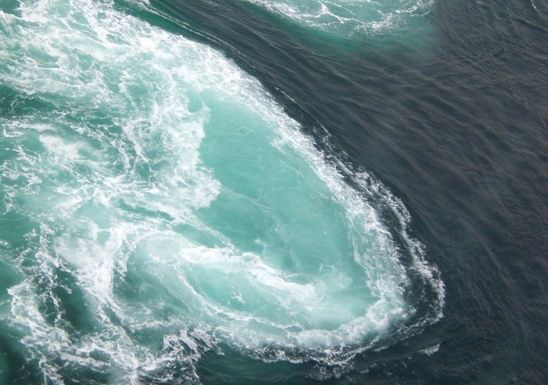 One of the metaphors that has continuously occurred to me when considering the nature of Reality as communicated by Adi Da Samraj is that we apparently separate beings are a lot like eddies in a river.

If you ever stop to look at the moving water in a stream or river, you’ll see all these swirling patterns created by the surrounding rocks, ground and current such that a distinct eddy will be visible.

One definition of an eddy is “a circular movement of water, counter to a main current, causing a small whirlpool.” So these whirlpools of different sizes and shapes are generated and appear to have a separate objective existence of their own. If you and I were standing on the side of a stream right now and I pointed out an eddy to you, you’d be able to see what I meant and would agree, yes, “I see it”. It would for you and I exist as a separate something, a specific whirlpool, there about 20 feet from the shore, about 8 feet in diameter although a bit oval in shape, and with a foam of white water swirling in it’s middle.

But what would we really have observed? The eddy exists in constant motion, generated moment by moment from the flow of water that is passing beyond it in the instance we’re watching it. So it’s not the water we’re seeing. An eddy is a pattern of energy brought into existence by it’s surroundings. It has no independent existence and yet it’s pattern creates the illusion of a coherent form when observed by you or I.

I hadn’t thought an eddy as something flowing “counter” to the main current! That also seems to extend the metaphor beautifully. Our sense of independent existence is counter to Reality. There is no actual eddy. There is only the entire Real condition of the energy in motion but when seen from a specific point of view, it appears to exist discretely.

The eddy has about the same actual existence as we apparently separate people have. I think of my body as a concrete something with an independent existence apart from it’s environment, but if I try to inspect that presumption it becomes obvious I’m more like a slowly rotating eddy than I am like a coherent something.

“My body” is in a constant condition of change with all its cells in a state of dying and renewing. Some huge portion of the mass I assume is me is made up of other organisms like those bacteria in my digestive track. At any moment if I were cutoff from oxygen I’d be quickly dead but when breathing, the air molecules enter my being through my lungs and are circulated by my blood stream to every cell in my body. At what point is the air part of “me”? I eat food several times a day that represent mass from other organisms until it is used to fuel and repair my body. When does the consumed cow or carrot become me?

Never mind considering the fact that the atomic nature of the mass of “me” is pure energy which if released all at once could reshape the landscape of the continent.

As Bhagavan Adi Da says in a variety of ways, it’s only point of view that generates the presumption of separation. So if there wasn’t a “me” or a “you” looking at the eddy in the stream, could the eddy be said to exist at all?

If the eddy were large enough and I were to fall into the river, understanding the danger that whirlpool represents might just save my life and thereby give me more time to consider the nature of Reality. I suspect Adi Da would agree that knowing in a conditional sense about the danger posed by an eddy has useful evolutionary value, but that this kind of knowledge is not Ultimate.

This morning, I watched a discourse by Avatar Adi Da Samraj about the usefulness of fear on occasions where it’s helpful in protecting our bodies. The defect in our function as self-contracted, point-of-view machines is that we tend to think we see eddies in every possible direction and at all times. The entire world represents dangerous circumstances and our every moment is designed to protect us or provide immunity from those dangers.

Thankfully, Grace is made possible through the right relationship to the Avatar of the Divine whereby one can stand on the shore, look into the river and only see God. However, in the meantime, I keep waking up as Cage, but you can call me Eddy.