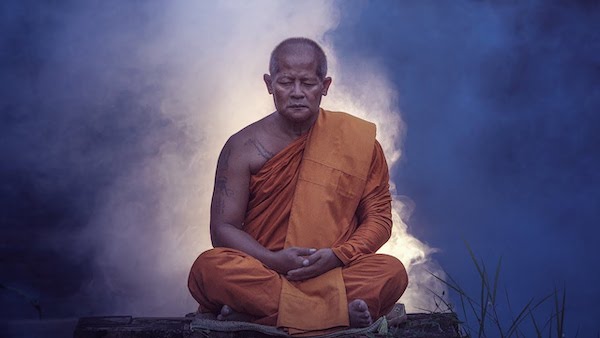 One question that continues to come up for me, relates to my curiosity of “who” is doing “what” at any moment in my sadhana. Adi Da Samraj gave a beautiful discourse called, The Divine Does the Yoga, which would seem to answer the question, but as yet, I’m still a knucklehead named Cage, so naturally, I don’t quit get it.

Can an ego truly be inclined toward ego death? I feel the answer to that is identical to, “can an ego choose not to seek”? No I don’t think that I, as Cage, could choose not to seek and by not seeking, end myself, since I exist only as a fiction generated by the action of seeking itself.

In my first few years as a devotee of Adi Da Samraj I was walking up a flight of stairs toward a home where we were going to have a weekly satsang, I felt a sudden terror that progression in the Way of Adidam meant my “death” in egoic terms. With each step my fear increased until at some point I was able to talk myself down off the ledge with some kind of distracting or consoling thought. Fifteen years later, I remember that fear more palpably than any of the fear I felt in 2017 when I learned I had cancer.

And yet today, I am growing in my felt relationship to The Beloved, Adi Da Samraj Who is Consciousness Itself. That One is felt as waves of bliss and ecstasy throughout my waking day and is resulting in all kinds of behavioural changes that include loving in all directions. I’ve almost totally lost my ability to feel unhappy about Donald Trump! The familiar contracted certainty of my separate nature is getting fuzzy around the edges. And the fear that gripped me so fiercely back then doesn’t seem to arise for me now (or at least, not so far!).

There is only God. That’s “my” growing certainty that gives rise to the paradoxical question of “who” does “what”? What I can say with some confidence is that as Cage, the body mind typing this blog, there is a growing “self-understanding” both felt and known. And accompanying this self-understanding there seems to be a loosening on the grip of my solid existence.

I’m drawn back to the image of Franklin Jones (aka Bubba Free John in the 1970’s) holding up a fist on the cover of “The Knee of Listening” indicating that we, as separate people, are like that fist in that our own action of self-contraction generates our felt separateness but that the fist disappears as the hand opens upon Realizing Our True Nature.

As my grip on my “self” softens through self-understanding, it’s like Beloved’s Light shines between the fingers with a force that further loosens the grip and contributes to my self-understanding which allows more Light to escape. A divine feedback loop. The divine quickening.

I was meditating the other day in my small, personal, far-infrared sauna. My eyes were closed and I had been considering The Five Reality Teachings. I was considering the whereabouts of the “witness” position. The idea of “where” we exist as Witness Consciousness. As I sat there, meditating but sweating, I found myself floating between myself as mostly mind, with body consciousness somewhat distant, but then my attention would fly back to my body as thick droplets of sweat ran the length of my torso.

Each time I felt my attention on my body, I felt a very subtle sense of being more contracted. I was free floating awareness, then I was particular awareness: sweat running down my shoulder. I understood that both mind and body are parts of the same separate self identity, but in the moments my body came into focus or became an “object” of my attention, I felt an ever so slight withdrawal from the blissful immersion in Beloved’s Samahdi I had been enjoying.

As this continued to happen I started to understand that every moment of physical and even mental awareness was a function of my attention settling on some “object”. Mental objects, physical objects, felt objects. It seems to me I “saw” attention racing around from one place to another always moving between it’s objects. This movement itself created a sense of time and space in awareness, of dimensions. But it was the characteristic of attention moving that I noticed most.

Then I intuited something about the locus of Consciousness as the Witness, prior to the flitting about of attention, prior to objects even existing and felt for the briefest moment that as the Witness, there is no motion, there are no dimensions, there is only an absolute still vastness and silence…and then I felt a drop of sweat.

This moment of insight continues to reverberate. It’s more self-understanding about the nature of existence. “Cage” has felt a little less solid for the past few days. Moments of love, bliss and joy have led to tears rolling down my cheeks like sweat had that day.

Still, at this point, the only thing I’m clear about regarding the question of “who” does “what” in my sadhana, is that this question doesn’t arise for the Enlightened.